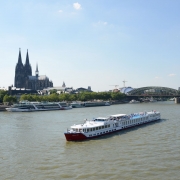 Duisport to Get Maersk Distribution Center

Container logistics company Maersk and duisport are combining their forces to build and operate a new distribution and logistics center in Duisburg. The new building is supposed to be planned and constructed in short order. Maersk will use more than 100,000 square meters in logport VI. The contract negotiations are in the final phase. The new addition will create 350 new workplaces.

logport VI, a parcel of almost 43 hectares which features a 500 meter long quay wall, is in the process of becoming the future home of a trimodal logistics location (including container terminal. After logport I in Duisburg-Rheinhausen, the Walsum location is the second-largest project of Duisburger Hafen AG in the past 20 years. Read the whole news here (external link).

The German “Autobahn” system has always been under federal law and financing. However, much of the planning as well as construction, operation and maintenance has been by the individual states on behalf of the federal government. Of the 16 states, four dealt with Autobahn segments along the Rhine-Alpine corridor alone.

From 1 January, the federal “Autobahn-GmbH“ took over all operative tasks together with roughly 10,000 employees that so far were employed by the federal states. In parallel, the new “Fernstraßen-Bundesamt (FBA)” will deal with the federal sovereign tasks involved. The idea is to improve construction and operation along the lines, which typically pass through several states. Read more details here (external link, German language).

While most river cruise ships on the Rhine do not operate during winter season anyway, some tours were offered all year. The pandemic has stopped these cruises until at least the end of January, with the near future uncertain. A check of main operators showed that for the time being they typically plan to resume operation during some time in March, which is the regular start of the cruise season.

River cruising is a significant industry on the Rhine and its tributaries. More than 150 ships regularly cruise on the Rhine, typically with a capacity of 150 to 200 beds each.

This website uses cookies to improve your experience while you navigate through the website. Out of these, the cookies that are categorized as necessary are stored on your browser as they are essential for the working of basic functionalities of the website. We also use third-party cookies that help us analyze and understand how you use this website. These cookies will be stored in your browser only with your consent. You also have the option to opt-out of these cookies. But opting out of some of these cookies may affect your browsing experience.
Necessary Toujours activé