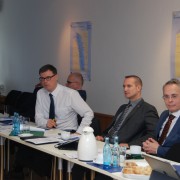 Corridor Coordinator Paweł Wojciechowski invited the Working Group on Core Urban Nodes and Regions of the Rhine-Alpine Core Network Corridor to a meeting on 30 January 2017 in Mannheim, Germany.

It is the goal of the Corridor Coordinator to promote good practices for the efficient management and use of infrastructures. In the Second Work Plan for the Rhine-Alpine Corridor – which has recently been approved by all Member States– it is clearly stated that successful implementation of the Corridor depends on a strong commitment and involvement of all stakeholders. Furthermore, in the Issues Paper “TEN-T Corridors: Forerunners of a forward –looking European Transport System” of June 2016, the European Coordinators have addressed the need for effective integration of urban nodes into
the corridors.

By bringing together the Core Urban Nodes and Regions along our Corridor, the Corridor Coordinator would like to encourage the participants to share knowledge and learn from each other. Conclusions from the Working Group will be presented at the next Corridor Forum Meeting in June 2017 and included in the report on the Corridor Work Plan, update of which is due to be provided in 2017.