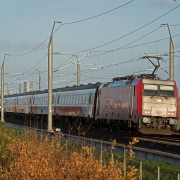 Sigrid Nikutta, head of German freight carrier DB Cargo, in a press meeting on 11 June has announced that DB will strengthen its carload business. Many newcomers compete on the profitable German market for unit trains of mass commodities as well as for intermodal trains, where they bite into DB’s market share. Meanwhile, the conventional business of running mixed freight trains still makes for a big share of DB Cargo business. DB Cargo faces no big scale competition here, but, because of its complexity, for a long time it has not been viewed as profitable. Many national carriers have sidelined this business.

DB Cargo now views the carload business as a unique strength and a way to generate more business. It has published plans for expansion and reorganization. This would mean a major policy shift, away from decades of conventional wisdom about the future of rail freight.

Five Dutch Provinces (Gelderland, Overijssel, Limburg, Noord-Brabant, Zuid-Holland) and the German State of Nordrhein-Westfalen strongly prioritize improvements in international rail transport. They sent a joint letter to both their federal governments on 10 June, with detailed suggestions. Among them are: Strengthening of regional passenger links, several improved international long distance passenger connections, and measures for expanding rail freight capacities. In the Rhine-Alpine corridor, this includes e. g. the third track on the German feeder of the Betuwe rail freight line to Rotterdam, and a rail freight link Antwerp – Venlo – Duisburg.

Read the Dutch version and the German version of the letter (external links).

Improvements in sight for HSL-Zuid

HSL-Zuid, the new high-speed passenger railway line crossing the Rhine-Alpine Corridor, from Amsterdam via Rotterdam and Antwerp to Brussels, and connecting towards Paris, opened about ten years ago. Problems and subsequent withdrawal of the designated special train sets have plagued the line from the start. Conventional trains have since run most passenger services.

Now operators announced a delivery date for a new set of high-speed trains. This will allow increasing speeds to 200 kph from 2023, resulting in substantial service improvement between the conurbations along the line.