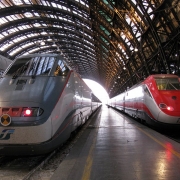 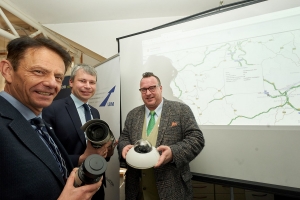 Mainz: The Autobahn A 61 roughly runs parallel to the Rhine. It is a main freight line along the Rhine-Alpine corridor. Truck parking is an important issue on the 200 km which the A 61 runs across the German state of Rheinland-Pfalz. A new system digitally surveys twenty parking lots with more than 1,000 truck parking spaces. Truckers get information about available space in real time. This will ease congestion at parking lots.

Costs of the new system were 3.6 million Euros. They were paid by the German federal government with support from the European Union within the URSA MAJOR 2 project. 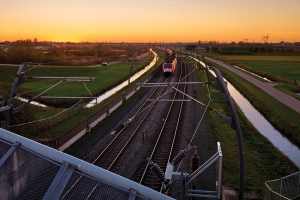 Rotterdam: In 2019, the number of kilometres run by freight trains in the Netherlands was up 5% against 2018. The main cause was rail traffic to and from Rotterdam port, which increased by 15% in the number of trains, and 13% in cargo volume. This means an average of about 15 additional freight trains per day to and from the port, both directions combined. 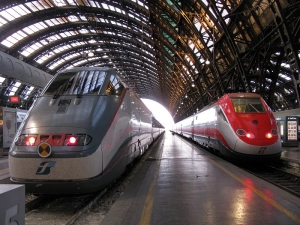 Milan: The Rogoredo – Pavia main line, part of the rail link to Genova within the Rhine-Alpine corridor and located south of Milan, is to become a 4-track section: Approximately 29 km of two new tracks are going to be built in close proximity to the existing double track line. In August 2019, infrastructure operator RFI started the national Environment Impact Assessment procedure. The intervention has two construction phases: First from Milan Rogoredo to Pieve Emanuele, and then from Pieve Emanuele to Pavia. Work on the 1st phase is expected to start in 2021, and expected to end in June 2024.

A new connection from Milan’s Malpensa airport to the Simplon line will complete the airport’s accessibility from the North. Approximately 5 km of double track will be put in place to reach the Gallarate node, plus another 1.1 km to connect with the Simplon line. The leader of the initiative is Lombardy’s regional rail operator Ferrovie Nord, which already runs the existing line between Malpensa airport and Cadorna station in downtown Milan.

In the early morning hours of 6 February, a Salerno-bound express train derailed on the high-speed line Milano-Bologna near Lodi, southeast of Milan, at full speed. Its derailed engine first hit a freight car that apparently belonged to a maintenance train. It then hit a building, killing two drivers and seriously injuring another two people. Traffic was re-routed via the parallel old main line. Read the news here (external link).