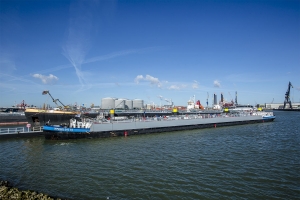 Arnhem: Seventeen parties have taken the first step towards a climate-neutral transport corridor between Rotterdam and Genoa. Organisations and companies have signed a declaration of intent in Arnhem for water, road and rail transport via the so-called Rhine-Alpine corridor to run on hydrogen. This initiative is known as RH₂INE (Rhine Hydrogen Integration Network of Excellence).

RH2INE will initially focus on realising production locations for hydrogen along the Rhine between Rotterdam and Cologne. This will enable the first ten to fifteen inland tankers to run on hydrogen in the coming years. RH₂INE currently comprises the following parties: the Province of South Holland, the State of North Rhine-Westphalia, the Netherlands’ Ministry of Infrastructure and Water Management, Province of Gelderland, Port of Rotterdam Authority, Duisburg Port Authority, RhineCargo, BCTN, EICB, Nouryon, Covestro, Air Products, Future Proof Shipping, HTS Group, NPRC, AirLiquide and Koedood.

The rail connection between the Terminal and the Genoa Pra’ Mare shunting yard recently got a second track. Together with a new yard configuration, it will double the handling capacity. This is the first of the interventions envisaged by the “iron plan” for the port of Genoa, defined by the Port Authority and the Italian railway network.

Berlin: A study to the German federal government suggest an electrification of a core Autobahn network as a prime measure for the greening of freight transport. The renowned authors are the Öko-Institut, Hochschule Heilbronn, Fraunhofer-IAO and Intraplan Consult. They checked the potential cargo that could go by electric trucks, as well as the necessary investments, for each main segment of the Autobahn network as well as for combinations of segments.

The resulting recommended core network of 4000 km includes the routes along the Rhine-Alpine corridor. Electrification would then be an alternative for all freight with origination and destination less than 100 km from the electric Autobahn segments. The study describes its methodology by the example of A 61, to the left of the Rhine, within the Rhine-Alpine corridor. The overall evaluation is positive.

This may be one of the main studies for the upcoming debates in Germany. It is available here (external link, German language).