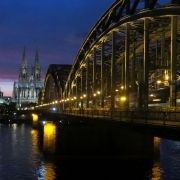 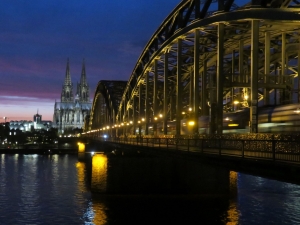 Photo (Martin Brandt): This year’s meeting was hosted at Cologne, a main transport node at the Rhine-Alpine Corridor.

The EGTC Rhine-Alpine held its regular General Assembly and Advisory Board Meetings on 8 November 2019 in Cologne.

Thus, the Advisory Board welcomed Łukasz Wojtas, Policy Advisor of the Corridor Coordinator (European Commission, DG Move), who elaborated upon “The Rhine-Alpine Corridor in the overall context of the evolving TEN-T policy”. 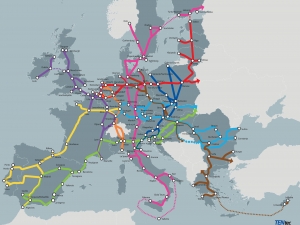 Mr. Wojtas pointed out that the EU transport corridors were developed by analysing the main urban areas in Europe as sources and sinks of traffic, and by studying the connections between them. Since the definition of the corridors, the main development priorities are:

Current evaluation focuses on network planning, infrastructure, interrelation between infrastructure and its use, and implementation instruments.

Mathias Niedermaier and Markus Nollert of ETH Zürich presented the Corridor Study “New insights and challenges for action on the Rhine-Alpine Corridor Rail Network” commissioned by the EGTC. 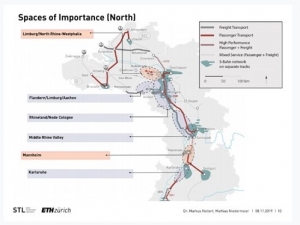 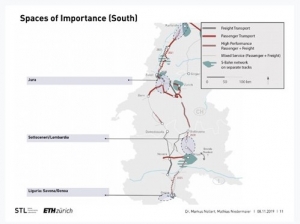 Illustration (Niedermaier/Nollert): Findings of the study.

The study looked for data on bottlenecks and infrastructure projects. It then verified the findings in meetings with regional stakeholders, discussing the importance of the various thematic fields. The study gives an overview on today’s infrastructure as well as on traffic demand and traffic relations.

The authors advocate political targets for a desired level of infrastructure, as is done in Switzerland. Given the time range of planning, building and finally utilizing the infrastructure, they find it counterproductive to build the investment targets upon the various and changing projections of today, as usually done. The study will be debated among the EGTC in the coming months.

With Dr. Thomas Ertel there now is a communication manager for the updated communication strategy. There is an active LinkedIn account, plus this weekly newsletter.

On 19 June 2020, the 2nd Corridor Conference will take place in Strasbourg, also commemorating the 5th anniversary of the founding of the EGTC.

Christianne van der Wal is the New Chair of the EGTC