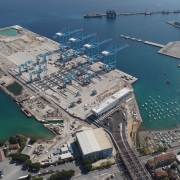 The RAlpin’s Rolling Highway transports more than 100,000 trucks every year, thus making an important contribution to shifting traffic from road to rail. The Freiburg – Novara relation takes 10 hours to complete the 414 km trip. It offers space for up to 22 trucks and each week provides 60 services in each direction.

In a recent issue, the Swiss-based “Internationale Eisenbahn-Revue” reported a concept to increase the service’s capacity. RAlpin has confirmed the details to the editor of this newsletter but points out that so far this is just a design study. However, its main characteristics are:

General information about RAlpin can be found here (external link)

Karlsruhe: Renovation of Road Bridge across Rhine to be finalized

Karlsruhe in the German state of Baden-Württemberg and Wörth in the neighbouring Rhineland-Palatinate are joined by a six-lane road bridge of 1966. The bridge is currently undergoing extensive repair to allow for several more decades of use.

During several weekends in summer and recently in October, the bridge was closed for all traffic. Since it is the only road bridge across the Rhine near Karlsruhe, this put strain on ferries, neighbouring bridges, as well as on motorists and on passenger services on the parallel rail bridge. From now on, there will be no more full closures in the context of this renovation, while quite some final work will reduce the number of lanes on the bridge roughly until the end of 2019. 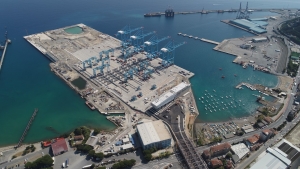 With the construction of the new terminal progressing (see photo; Vado Ligure is located west of Genova), the port authority has issued a tender for a new breakwater. The tender (closed on October 30) is awarded based on criteria that mostly reward the qualitative elements (85% of the score available) compared to those of the most economic offer (15% of the score).

The starting price is 77 million 890 thousand euros, including 627 thousand euros for design costs and just over one million euros for security charges. It is planned to dismantle about 400 meters of the current pier and to re-use the 13 boxes removed in the new dam, in addition to laying two new boxes. The new breakwater pier, turned towards the open sea to improve the maneuverability of the ships, will reach into greater depths, from 35 to 49 meters. In the final configuration, the breakwater of first phase will be stretched towards the sea for another 240 meters.