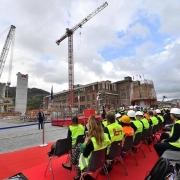 On 23 October 2019, EFIP members gathered in Strasbourg (France) for their annual Executive Committee meeting and to celebrate the 25th anniversary of EFIP. The event was hosted by the Port of Strasbourg and the CCNR (Central Commission for the Navigation of the Rhine).

On the 25th anniversary, Mr Friedrich Lehr, EFIP President, remarked that “as enablers of green logistics, inland ports are able to support the goal of a climate neutral economy by 2050.” EPP Transport Coordinator Marian-Jean Marinescu underlined that “to increase the modal share of inland waterway transport and rail, inland ports are indispensable hubs that need to be supported in order to address all the transport challenges we have.” Pawel Wojciechowski as TEN-T Coordinator pointed out that “inland ports connect European logistics across the TEN-T Corridors. As multimodal hubs, they have been important in the European transport network. That is why EFIP’s presence in Brussels has been essential for 25 years and I hope it continues.”

Logistics follows coal. The largest container terminal in the European hinterland is being developed in the Port of Duisburg. Duisburger Hafen AG (duisport) will withdraw its coal island from the market, starting in 2020, and build a trimodal container terminal on the site together with its international partners COSCO SHIPPING Logistics, Hupac SA, and HTS Group. This is duisport’s response to the sharp decline in coal handling resulting from the energy transformation. In the future, duisport will instead use the coal island in particular to handle the booming trade with China. The new terminal will be developed into the key European gateway hub, in particular to handle train traffic along the corridors of the New Silk Road, and will therefore operate under the name “Duisburg Gateway Terminal”.

Even now, around 30 percent of all rail-based trade between China and Europe runs through the Port of Duisburg, which is the start and end point of the China trains. Currently, between 35-40 trains per week run between duisport and a dozen different destinations in China. The terminal will significantly increase the Port’s capacities for trade with China.

In the future, up to 100 China-bound trains per week, rail traffic on the European rail corridors, in particular to Eastern and Southeastern Europe, and inland waterway services to seaports will be able to operate from the “Duisburg Gateway Terminal”, which will thereby generate an annual throughput of around 850,000 standard containers (TEU) upon completion of the terminal.

Genova: After the tragic collapse of the Morandi bridge, the first piece of the new bridge was lifted on 01 October. Container traffic in port already recovered. 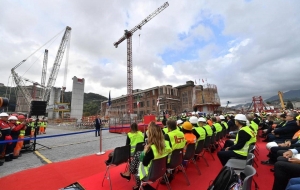 At the sound of a siren, the lifting operations of the first piece of deck of the new bridge began, which is built after the tragic collapse of the Morandi viaduct. The 50-meter long beam, built in steel and weighing 500 tons, was hoisted to almost 50 meters in height where it will support the first deck of the new Polcevera viaduct.

In this context, the port of Genova points out that the difficulties after the post-bridge shock are overcome. Thanks to the containerized traffic handled by the port of Genoa starting from June, the positive sign returned in 2019 with an increase of 1.2% compared to the first 8 months of 2018 (a record volume of 1,779,506 TEUs).