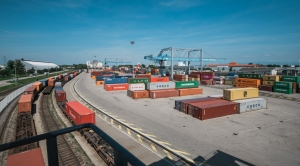 PAS, the Strasbourg port authority, reports a significant upswing in traffic for the first half of 2019: River transport is up 6.3%, reaching a total of 3.8 million tons from January to June. Rail traffic showed an even stronger increase, by a full 16% to more than 700.000 tons. The increase of rail traffic was mainly caused by container transport.

Among the international railway lines that will get financial support from the EU along the Rhine-Alpine corridor, there now is also the Venlo-Kaldenkirchen (-Viersen) link. Today it serves partly as a regional passenger line and mainly as a suitable freight bypass of the German main railway line from the Ruhr area to Emmerich. It is located about half way between Emmerich and Maastricht/Aachen. On the German side, the stretch between Kaldenkirchen and Viersen is a single track bottleneck. The money (5.8 million Euros) is intended to improve track and stations for the use of freight trains.

More on this railway link on Wikipedia (external link).

Hydrogen-powered tug is world first for Port of Antwerp 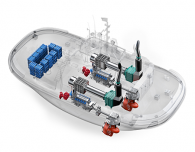 Port of Antwerp has ordered construction of a tug powered by hydrogen, the first in the world. This unique “Hydrotug” is driven by combustion engines that burn hydrogen in combination with diesel. The motors also comply with the very strictest standard, the EU Stage V, making them the lowest-rated for emissions on the market. This ultra-low-emission tug is being built by Compagnie Maritime Belge (CMB), a pioneer in the field of hydrogen power for shipping. With this world first Antwerp is making an important step in the transition to a sustainable, CO2-neutral port.