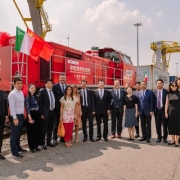 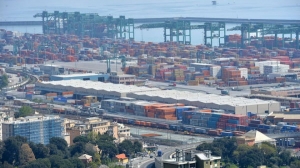 The first stage of the expansion of the rail-freight handling capacity in Genoa Prà, a six-month 25-million euro investment programme, has been completed. Plans are afoot to upgrade the four existing rail tracks and the installation of a double-rail track route to the PSA Genova Prà Terminal. By January 2020 the second direct on-terminal rail link with the railway network is scheduled to open. The new six-track configuration, with an average length of 450 m and a double-track route to the PSA-operated terminal, will increase the number of daily trains serving the Port of Prà, thereby further expanding overall capacity of the leading container gateway terminal in the Mediterranean.

The port of Rotterdam achieved throughput of 240.7 million tonnes in the first six months of 2019. That is 3.4% more than in the first six months of 2018. Container throughput, one of the strategic priorities of the Port Authority, rose by 4.8% (in tonnes, +6.4% in TEU) by comparison with the first six months of 2018, which is also a new throughput record. That growth was mainly due to higher import and transhipment volumes. Revenue from port dues, and rental and leasehold income from issued land, increased slightly, leading to a rise in revenue of 4.0% to € 357.8 million, with liquid bulk making the largest contribution. Partly because operating expenses rose less than revenue, the result from ordinary activities before taxation improved by 7.0% to € 134.8 million. 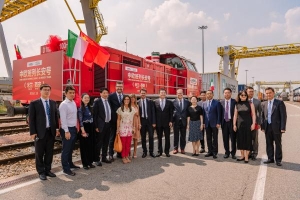 The Xi’an International Port Area and Swiss intermodal operator Hupac launch their cooperation aimed at boosting rail freight transportation between Italy and China. On 19 July, the first train Milan-Xi’an left the Terminal Busto Arsizio-Gallarate. Hupac pursues a strategy of developing the intercontinental east-west axis as a natural integration to its traditional markets in Europe. With branch offices in Moscow since 2011 and in Shanghai since 2016, and with the procurement of own rolling stock for the Russian broad gauge, Hupac has prepared the ground for new business areas in the East and Far East. The Busto Arsizio-Gallarate terminal acted as a logistical platform for this new challenge.