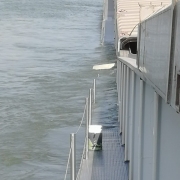 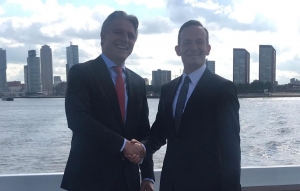 Transport Minister Volker Wissing from the German federal state of Rhineland-Palatinate visited the Port of Rotterdam as part of a three-day delegation trip to the Netherlands. Wissing and Emile Hoogsteden, Vice President of the Port of Rotterdam Authority, emphasised the importance of the Rhine Corridor and its ports for the transport of goods to Rhineland-Palatinate and Europe as a whole.

“With the expansion of Europe’s largest seaport and the doubling of container throughput, the capacity of hinterland transport must also be increased,” said Transport Minister Wissing and Port Vice President Hoogsteden. “The low water levels of 2018 have revealed the urgent need to expand the role of the Rhine as the central European transport and logistics axis,” Wissing added. 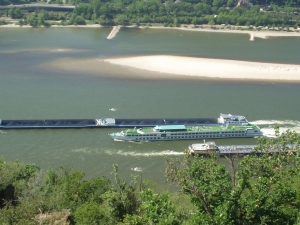 The action plan „Niedrigwasser Rhein“ (low water level on the Rhine) was presented by German federal Minister of Transport Andreas Scheuer on 4 July. It was developed together with companies depending on water transport on the Rhine and includes eight measures, from more suitable barges to faster improvements of infrastructure.

Spectacular accident on the Rhine 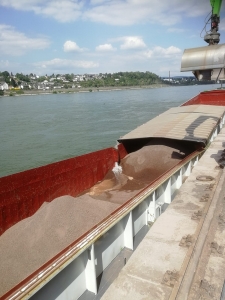 On 2 July, a spectacular accident happened on the Rhine: A motor barge gave way and snapped while loading rocks in Andernach port, in the scenic but narrow Rhine valley. Water police halted all traffic for some hours to avoid further damage by waves. The barge was stabilized by lighting and pumping out all water, it was then towed into the inner harbour. The reasons for the accident were not immediately known.