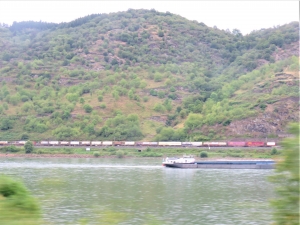 Mainz / Koblenz: The Middle Rhine Valley is a crucial part of the European transport infrastructure. Besides the river traffic, each bank accommodates a double track railway line, both of which see very heavy traffic. Deutsche Bahn has in the past invested in several kinds of noise protection along the route. Among them are protective walls, devices for sound absorption at the rails, and protection of buildings, mainly improving the windows at 8,000 apartments along the line.

For detailed information, follow this external link (German language) and look for the regional news, especially regarding the state of “Rheinland-Pfalz”.

GSA.Europa.eu: The European GNSS Agency (GSA) is working together with the European Commission (EC) on an app to facilitate the movement of goods and freight within the EU in support of the COVID-19 pandemic response. The “Galileo Green Lane” app will ease the flow of freight through borders and enable the efficient transit of critical goods.

The app will have two interfaces. The first is for border control authorities and provides a real-time visualisation of the overall border situation between a country and its neighbours. In turn, border officials can contribute information to the system by regularly feeding updates into the app on the traffic flow and waiting times at their borders.

The app will also feature a user interface providing drivers with a real-time visualisation of borders of interest to them, through an EU-wide map indicating Green Lane border crossing times. When drivers enter a geo-fenced area within a specified distance to a border, they can receive a notification produced by the border officers on the situation at that border.

New A 40 Rhine Bridge at Neuenkamp under construction

Duisburg: The German Autobahn A 40, connecting the Ruhr area with the Dutch town of Venlo, crosses the Rhine at Duisburg-Neuenkamp via a bridge of 1970 vintage. Technically, this bridge is almost identical to the A 1 Bridge that is currently being replaced at Leverkusen. It has similar structural problems, since it was built for just a fraction of the current traffic. Furthermore, for some years the Neuenkamp Bridge had been extended to six lanes, causing structural stress from resulting leverage. In 2017, the bridge was temporarily closed for motor traffic. It remains under daily observation and is blocked for overweighed trucks.