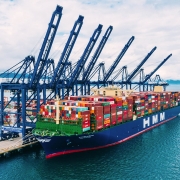 Beyond these short-term worries, the Lötschberg base tunnel as part of the Lötschberg-Simplon line is a main rail connection across the Alps, along the Rhine-Alpine corridor. Different from the parallel Gotthard tunnel, the “larger half” of the Lötschberg base tunnel is single track. The tunnel is therefore operating at its limit. Freight trains often have to use the old mountain line. However, when it was built, a significant part of the tunnel was prepared for a second track. This will be installed in the coming years, shortening the single-track bottleneck and thus improving capacity. Find instructive texts and video in German language, French language, Italian language and English language here (external links).

Alessandria: The time schedule of the project for the new freight center in Alessandria was finalized: the economic feasibility project will be ready within 10 months, the technical-economic feasibility project within 12 months and the definitive project will be ready within 18 months. The Alessandria Smistamento (“rail hub”) project represents one of the strategic activities to be developed to achieve the optimization of the logistic flows that are part of the Genoese node and the ports of the Western Ligurian Sea system.

Alessandria in Piemonte Region is conveniently located for an “inland port” hub, north of the Ligurian Alps, with rail connections to the Ligurian ports as well as the Padavian conurbations and the Rhine-Alpine axis. In this context, the identified areas, also included in the new “Simplified Logistics Zone” envisaged in Law 130/2018, may represent a site of great interest both for the development of rail / intermodal transport services and for potential settlements of logistics activities and buffer areas.

Antwerp / Rotterdam: The currently largest container ship, HMM Algeciras, visited Antwerp and Rotterdam on its scheduled trip on which it is to return every 12 weeks. HMM Algeciras takes part in a “rotation” of a dozen ships of similar size, jointly operated by several shipping companies. The “rotation” regularly connects several large East Asian ports with several main European ports on a weekly schedule, among them Antwerp and Rotterdam as well as, yes, Algeciras.

The vessel is roughly 400m long and more than 60m wide, storing 24 containers across in 24 layers, of which 12 on deck, resulting in a capacity of almost 24,000 TEU. While it shares these overall dimensions with several other ships, it can carry some containers in an additional 13th layer on deck. Twelve ships of this class are being built, of which three already entered service. Find the news about its arrival in Antwerp and Rotterdam here (external links), plus detailed info about the vessel’s type (external link, German language).