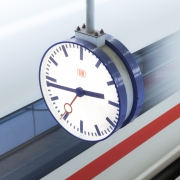 Bern: From 1 July, federal employees in Switzerland are obliged to take the train instead of the airplane for all business trips that last less than six hours by train or when the train is faster than air travel. Exceptions are possible to avoid an extra overnight hotel stay.

As a rule of thumbs, all destinations along the Rhine-Alpine corridor in Italy, France and Germany are now train destinations under this rule, while the Netherlands and Belgium may still be reached by air. With roughly 35,000 employees, the federal administration employs just about 1/5th of the Swiss public sector. However, the clarity of rules makes this a “pilot case” for avoiding air travel.

Here is the official press statement, with links to the original documents, in German, French and Italian language (all external links). The annexes also compare rail and air travel times between Bern main station and downtown destinations across Europe.

Andernach: Noise emissions from Andernach port, near Koblenz at the Rhine, have been an issue with the town of Neuwied on the opposite river bank. With a yearly turnover of about 3 million tons, mainly bulk and container traffic, Andernach is a significant logistics hub (see this external link).

During the past weeks, along the Rhine-Alpine corridor most of the passenger rail connections are back in operation. Not all international trains are running again, but the basic services are reinstalled along and across the corridor.

It now appears that during the past months punctuality was up. For example, across Deutsche Bahn, in February only 79.3% of all long distance trains were less than six minutes delayed. In April, the figure rose to 88.6%. Reasons are the less crowded network as well as less crowded trains and stations. Subsequently, the figure for June fell back to 81.9%. More info on DB passenger train punctuality can be found here (external link, German language). Compared to overall journey times, most delays appear small, but they often make passengers miss connections, resulting in much longer travel times plus a bad travel experience.

Rhine-Alpine Talks – Corona and the Corridor