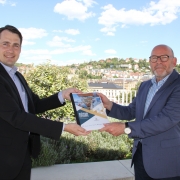 Stuttgart: The state government of Baden-Württemberg in southwestern Germany has published its “Güterverkehrskonzept.” It is an extensive study on the trends and needs of goods transportation as well as the state of the infrastructures. It offers projections until the year 2030, and the political targets as well as the necessary programs.

A big share of the identified bottlenecks as well as of the intended improvements is along the Rhine-Alpine corridor. Some of the the recommended action fields are of special relevance to corridor transport and infrastructure: Additional financial support for rail and waterway transhipment infrastructure, securing logistics areas in ports, additional truck parking space, as well as networking activities among logistics, politics and administration. Other fields include new concepts for urban logistics, innovative vehicles, and the legal framework.

The Baden-Württemberg minister of transport, Winfried Hermann, and the head of Fraunhofer Institute’s LOGWERT center at Heilbronn University, consortial group leader Professor Tobias Bernecker, presented the study. Members of the EGTC Rhine-Alpine have contributed to its content. While the “Güterverkehrskonzept” in itself is not legally binding, the government actions in Baden-Württemberg will likely follow along the presented measures and suggestions in the coming years.

Here is the ministry’s press release, with links to both the “Güterverkehrskonzept” and a presentation (external link, German language).

Den Haag: The transport of goods by hydrogen-powered inland vessels between the ports of Rotterdam and Genoa has come a step closer. The RH2INE partnership, which includes the province of Zuid-Holland, has received a subsidy of half a million Euro from the European Commission for further research for a major plan. Zuid-Holland, the German state of North Rhine-Westphalia and the ports of Rotterdam, Duisburg and RheinCargo did submit the application. They also contribute half a million euros to the further research.

The aim is to have at least 10 hydrogen-powered ships sailing on the main trade routes between the port of Rotterdam and Cologne, along the Rhine-Alpine corridor, by 2024. Three hydrogen filling stations are being built along the route. This number has to be expanded in 2050 to enable the use of hydrogen by freight transport up to Genoa. Up to twenty parties work together in RH2INE, including governments and private companies, to make the production, distribution and use of hydrogen possible.

Last week, this newsletter reported that all Swiss federal employees are obliged to take the train for business trips of less than six hours, which translates into all destinations along the Rhine-Alpine corridor in Switzerland, Italy, France and Germany. However, our Swiss federal source has asked us to correct their earlier figures: Swiss federal employment stands at 35.000 “full-time equivalents” or 1/5th of the Swiss public work force. This means that a much higher number of people than previously reported is to travel under the new rules.