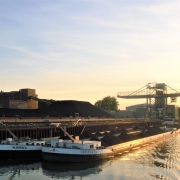 The railway construction accident at Rastatt in August 2017 resulted in the closure of the main railway line along the Rhine-Alpine corridor south of Karlsruhe, at a point where detours were not easily available. It left rail transport along the Rhine-Alpine corridor in shambles for months. Since that accident, plans have been made to prepare against future disruptions and to have more redundancy on the infrastructure network.

Dr. Sebastian Wilske, deputy director of the Regional Planning Association Middle Upper Rhine in Karlsruhe, last week gave an interview to Railfreight Live on the current state of this work. It appears that a number of organisational measures have already been taken, making coordination easier in case of emergencies, but that significant additional infrastructure has not been put into place.

First data is in on the impact of the covid-19 crisis on some seaport throughput along the Rhine-Alpine corridor:

Rotterdam had a significant downturn in overall traffic in the first half of 2020. While bulk throughput was hit hard, the slow in container traffic was comparatively marginal (-3.3%). Read more details here (external link).

Genoa reports a similar trend on bulk, with an average decrease in container traffic of 10.5% compared to 2019. Furthermore, the cruise business came to a complete halt, and the ferry business declined sharply. Read more details here (external link).

Within the project “RPIS 4.0 – smart inland port community system”, the Upper Rhine Ports are developing a smart communication system that so far centers around container traffic and terminals. However, interest in cooperation on bulk traffic has been high among the business partners in the various ports. This lead to an extension of the project scope. Further activities will include rail container freight, cruise ships, and transnational coordination.

The “Upper Rhine Ports” are an international association of the ports from Mannheim and Ludwigshafen upstream, representing the port traffic along this segment. “RPIS 4.0” is supported by a 50% grant of the European Union’s Interreg Programme. Read more: External link (German language), external link (French language).

On Monday evening, a concert was held under the new bridge in Genoa, to thank the bridge construction workers. The bridge will open next week, only roughly two years after the collapse of the previous construction. See the upcoming next week’s newsletter for more!