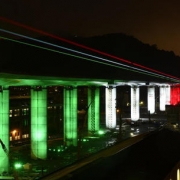 On Monday evening, Italian President Sergio Mattarella and Prime Minister Giuseppe Conti, together with regional and local dignitaries, formally opened the new motorway bridge at Genoa in a ceremony. The previous bridge had collapsed on 18 August 2018, killing 43 people. The new bridge, designed by star architect Renzo Piano, has 43 street lamps to remember the casualties of the collapse. It is a completely different design from the previous “Morandi” bridge and will open for traffic on Wednesday morning.

The bridge is an important traffic link, both inside Genoa and for long distance traffic between Italy and France. Its collapse had not only caused severe local traffic jams as well as significant detours on long distance traffic, but also interrupted the rail link to the port as well as local rail transport. Immediate reconstruction was inevitable.

The new bridge was planned and built in a record time of less than two years. This includes the time for clearing away the debris and handling all legal procedures. Such a process process would usually take 10 to 15 years, even with secured financing.

To speed up this process, some extra measures were taken: Work went on day and night, seven days a week, with only slight interruptions due to bad weather and the Corona crisis. Also, the national President of the Council of Ministers has appointed the Mayor of Genoa Marco Bucci as Commissioner.

The Decree states that “For the demolition, removal, disposal and landfilling of the resulting materials, as well as for the design, assignment and reconstruction of the infrastructure and the restoration of the connected road system, the Extraordinary Commissioner works notwithstanding any provision of law other than criminal law, [ … ] as well as the mandatory restrictions deriving from belonging to the European Union”.

The Commissioner, therefore, was able to exercise extraordinary powers for the expropriation and acquisition in possession of the areas necessary for demolition and reconstruction operations. Autostrade per l’Italia (ASPI), the concessionaire of the collapsed section, was removed from reconstruction and obliged to meet the costs of rebuilding the infrastructure and restoring the connected road system, and to reimburse the public resources made available to the Commissioner. This choice to exclude the manager was declared legitimate by the Constitutional Court in July 2020.

In the aftermath of the bridge collapse, emergency rail support measures were established in Genoa. On May 15, the European Commission approved all the measures provided by the “Genoa Law” in support of railway intermodality from the collapse of the Morandi bridge until December 2019.