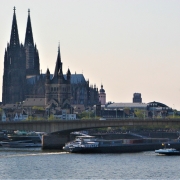 The new French Prime Minister Jean Castex has visited the intermodal terminal at Valenton near Paris. In this context, he declared that freight trains will not have to pay access charge for the French rail network for the remainder of 2020, and will have to pay only half the usual charge for 2021.

Access charge is a significant cost driver for train operators and may affect routing of freight trains. In principle, overcrowded segments of the Rhine-Alpine corridor could profit from re-routing of some trains via France. However, the main purpose of the measure apparently is to strengthen rail freight in general.

The Calandbrug, a vertical lift bridge in Rotterdam port, was temporarily out of order from 5 pm last Friday afternoon. The bridge serves road traffic and also is an important connection between the port and the Betuwe rail freight line to and from the European hinterland. The bridge was immediately repaired and could be reopened around 10 pm.

HGK, the port and logistics branch of Cologne City’s municipal utilities, has recently acquired “Shipping Group”, previously owned by Imperial Logistics. Shipping Group is a main carrier for bulk, gas and liquid bulk on the Rhine and its tributaries. Operating and chartering roughly 300 ships makes it a major player on the European inland waterway market. The acquisition rounds off the port, rail and intermodal activities of HGK, adding 900 people to its workforce that now stands at 2,500.

Under German law, a town may engage in significant economic activities only if that activity serves a public purpose. For the takeover of Shipping Group, this has now been demonstrated: „I think it’s good that the minister confirms our legal assessment“, says Cologne’s mayor, Henriette Reker, referring to a joint statement with the responsible ministry of the German State of North Rhine–Westphalia.