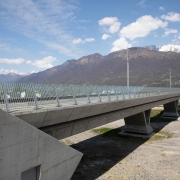 German minister of transport Andreas Scheuer has launched three “Digital Rail” starter projects that will increase capacities on core parts of the German rail network. Most in focus is the digitization of the new railway station in Stuttgart and its connecting rail links.

However, the fast passenger line from Cologne to Frankfurt will also get the new technology. It is in the center of the Rhine-Alpine corridor and has since its opening drastically reduced travel times not only between the two cities, but also for many connections between European conurbations. At the same time, it has freed capacities on the old line along the Rhine River, which is a central link in the European network of rail freight. The third project for digitization is the Scandria corridor, linking Scandinavia with Italy across Germany.

Birsfelden and Auhafen ports in Basel got a new, additional rail link that connects them with the Swiss railway’s shunting yard at Muttenz. After three years of construction, the line opened on schedule last week. The purpose of the new link was redundancy: These main parts of the Basel ports would have lost their rail connection in case of disruption on the only previously existing link. Read the news here (external link, German language).

The new Ceneri base railway tunnel will open these days with a ceremony on Friday, and it will see first regular traffic. Mount Ceneri is a rail and road pass between Bellinzona and Lugano, on the southern end of the Gotthard line in Switzerland. Until December, scheduled trains will occasionally run through the new tunnel, while existing schedules will remain. From December, all long distance traffic will then regularly use the new tunnel. Schedules will greatly improve, including more passenger connections between Zürich and Milan as well as shorter travel times. Further improvements are announced for the years ahead.

With the new Ceneri base tunnel, the technical potential of the new Gotthard base tunnel can be fully utilized. For some years, trains on the Gotthard axis could avoid the steep grades of the old Gotthard line, but the challenge of the similar grades at the old Mt Ceneri route had remained. Now, freight trains can pass the Alps on the whole Gotthard route without any steep climbs. This is a central element of the NEAT corridor investment strategy.