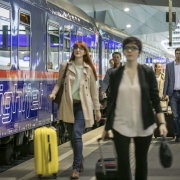 ÖBB already runs two of their night trains along parts of the Rhine-Alpine corridor:

The cooperation will significantly expand the network along the Rhine-Alpine corridor:

Additional night trains with relevance to the Rhine-Alpine corridor:

The Düsseldorf – Vienna train as well as the Hamburg – Lörrach train and some relations of “Urlaubs-Express” from Düsseldorf also carry autos.

A local passenger ferry across the Rhine connects the French and the German side between Drusenheim and Greffern / Rheinmünster, north of Strasbourg. It was recently closed for planned maintenance and will reopen in early 2021.

The ferry was established in 1977 and serves local traffic as well as tourism. Usage is free of charge under an international agreement. The Département Bas-Rhin and the state of Baden-Württemberg share the costs equally. The nearest bridge is about 10km upstream. Despite being just a local connection, it carried more than 600,000 passengers in 2019. More details here (external link, German language).

The talks will see the keynotes “Cross-border continuation of the Gotthard and Ceneri Basetunnel” by Hans-Peter Vetsch, General Secretary of the Gotthard Committee, and “Interreg: Priorities for cross-border cooperation post 2020”, by Pascal Boijmans, DG Regio, Head of Unit.

Presentations will be: “Focus points of cross-border connections and regions on the Rhine-Alpine Corridor”, by Coen Mekers, Province of Gelderland; “EURODELTA-SURE – a functional urban area at transnational scale”, by Peter Pol, EURODELTA-SURE Secretary; Policy Advisor City & Region, The City of The Hague; and “Flagship Project French-German public transport”, by Werner Schreiner, Delegate of the Prime Minister for cross-border cooperation, State Chancellery Rhineland-Palatinate.

Reflection and Discussion will be with Martin Guillermo-Ramírez, Secretary General of the Association of European Border Regions (AEBR). The talks will be moderated by Jörg Saalbach, Director, Interregional Alliance for the Rhine-Alpine Corridor.

Become part of the corridor community and register here for this meeting. Registered participants will receive their login credentials two days before the meeting!