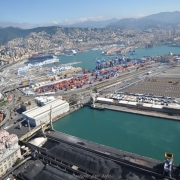 The rail connection between the port of Rotterdam and the Betuwe Line to its hinterland has not been in a satisfying condition. Infrastructure operator prorail has now published an independent report about the reasons: “Coincidentally non-compliant or predictably unsuitable?” In rather blunt words, the report states that there is not a single cause.

Instead, the problems stem from a multitude of actors and decision makers and a complex set of rules, including many compliance rules, the study says. It also states that in case of a real emergency, the actors are able to find and carry out a solution rather quickly. Read the whole report here (external link, Dutch language).

A draft for a European pandemic plan for goods transport was presented by the German federal ministry of transport. Its three fields of action are:

Read the draft “Policy considerations for a pandemic or other major crisis contingency plan for European freight transport” here (external link). The ministers of transport debated the plan during a virtual meeting on 8 October, together with European Commissioner for Transport, Adina-Ioana Vălean.

The new Calata Bettolo container terminal opened next to the existing terminal in close proximity to the Old Port of Genoa. It has a total area of 7 ha and currently allows for ships roughly up to the size of the “Panamax” class (around 5,000 TEU). With a depth of 17 meters, it may become accessible for even larger ships, once the planned new breakwater will be built.

Currently, the new terminal will see a throughput of about 150,000 TEU/year, which can technically increase fourfold. Read more here (external link).