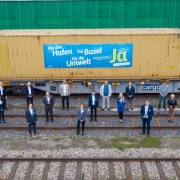 Port of Antwerp, the Port of Rotterdam Authority, the Port of Amsterdam, North Sea Port Netherlands, Drechtsteden and De Vlaamse Waterweg intend to set up a single shore-based power system for inland shipping and the river cruise industry. This will contribute to the user-friendliness of this facility, which is used to provide moored vessels with electric power. On behalf of all these ‘Walstroompartijen’ (Shore-Based Power Parties), the Port of Rotterdam Authority has published a European call for bids, which will ultimately lead to the selection of a contractor for these services.

The key focus throughout is sustainability. Public authorities and private firms in the different ports are working together to promote transport by inland shipping and rail rather than road haulage. Another point that is high on the joint agenda is reducing the volumes of carbon dioxide, nitrogen oxide and particulates released into the atmosphere. Read the whole news here (external link).

At the end of the first half of the year, duisport was still slightly below the figures for the previous year. Declines in the first half of the year were offset thanks to the dynamic developments in the third quarter. duisport’s trade in goods in the so-called TEU (Twenty-foot Equivalent Unit) range is now two percent above the previous year’s figure. This increase could not have been expected considering the pandemic.

Operations in the Port of Duisburg are running at 100 percent despite the coronavirus crisis. With additionally mobilized storage space and rapid solutions for onward transport, Europe’s most important logistics hub continues to function even in times of crisis. At the same time, it took advantage of emerging market opportunities: As early as April, the rail service was expanded to include further Chinese partner destinations. Read the whole news here (external link).

The Grand Council of Basel Stadt, legislature of the canton as well as the city, in February designated a credit of 115 million Swiss Francs for the construction of a 3rd harbour basin. The federal government supports the project with another 40 million. An initiative against the project caused a people’s vote, which will be held on 29 November.

These days, a committee of more than 100 people from politics, economy, associations and trade unions starts campaigning for the project. It cites ecologic advantages of inland navigation and rail transport, as well as strengthening of the national supply chains. Read the whole news here (external link, German language).