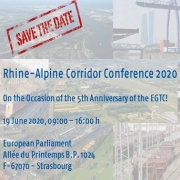 Progress on river crossings in Duisburg and Karlsruhe

Duisburg: An extended eight-lane bridge, called “Rheinbrücke Neuenkamp”, will ease out a bottleneck on the German Autobahn A 40, which via A 3 and A 57 connects the Netherlands with Düsseldorf and Cologne and is a key infrastructure for the river port at Duisburg.

Andreas Scheuer, German Minister of Infrastructure and Telecommunications, has started the construction work with a ground breaking ceremony on 16 December. Costs are estimated to be 365 million Euros for the new road link of 4.4 km, including 250 million for the bridge itself. Special efforts are made for noise protection.

Karlsruhe: The work of renovating the main bridge that crosses the upper Rhine between Karlsruhe and Wörth will be finalized until the end of the year. Road closures had caused traffic problems on several weekends in the past, and because of the construction work the bridge had not been operating at full capacity for years.

Speyer: During the late evening of 19 December, a cruise ship going downstream collided with a tank motor ship going upstream, at Speyer near Mannheim. The «MS Thurgau Prestige» carried 103 passengers and 36 staff members, the freighter carried about 2000 tons of petrol. About 20 cruise passengers were hurt. Some were transported to nearby hospitals for checks of mostly minor injuries. No petrol was discharged during the accident. The cause of the accident is yet unknown. 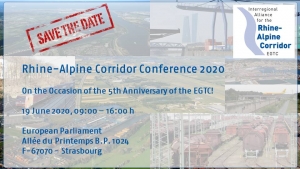 The Interregional Alliance for the Rhine-Alpine Corridor EGTC is a successful example of cross border cooperation in a very large area, i.e. the TEN-T Core Network Corridor between Rotterdam/Antwerp and Genoa. Starting off with 10 founding members, the EGTC has grown to 25 members now. The members are regions/provinces, cities and large ports from six countries along the Rhine-Alpine Corridor. This EGTC is hence an appropriate organisation to function as an important stakeholder for the development of this Corridor, representing the interests of its members with one voice. The EGTC operates also as Lead Partner or partner in several EU-funded projects.

The choice of the legal form “EGTC” has proven to be the best solution for such an interregional cooperation. The Conference in Strasbourg is thus also an interesting occasion to roll out EGTC’s to other cooperation spaces willing to organise their work on a solid legal basis, i.e. an “EGTC.”

Save the date and watch for updates!