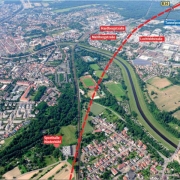 BASF in Ludwigshafen has ordered a new tanker, to operate on the Rhine from late 2022. It will be one of the largest tankers on the Rhine and is specifically built for navigation when the Rhine is at low water. It will still be able to pass the critical point in the Rhine near Kaub with a cargo of 650 tonnes even at a water level of 30 centimetres (corresponds to a water depth of 1.60 metres), which is significantly more than any other tanker available today. At average low water level, its transport capacity is around 2500 tonnes, twice that of conventional inland vessels.

Typical cargo ships on the Rhine are built to fit the lock dimensions along the tributary rivers and canals. They therefore are narrow and have considerable draught. The new tanker will be significantly wider, since locks are not an issue along its route. Read the news here (external link).

A new intermodal freight transport service between Bologna and Köln has been inaugurated on 11 January 2021 thanks to an agreement between Arcese and Tx Logistics, a company of Mercitalia group.

The German region of Ruhr and Northern as well as Central Italy are now directly linked via the Rhine-Alpine Corridor through the new Swiss Ceneri base tunnel. The service runs 5 times per week, allowing a transit time of less than 20 hours and the handling of up to 15,000 large volume semi-trailers (P400) per year.

Saving approximately 86% of CO₂, compared to road transport for each single segment, this new service undoubtedly encourages the modal shift from road to rail and responds to the growing demand for increasingly sustainable solutions for the environment.

Three years ago, the construction of the new additional double track rail line along the Upper Rhine was halted at Rastatt by the collapse of the tunnel construction site under the existing railway line. Deutsche Bahn had announced to restart the construction work last November, which apparently did not happen. The German Vice Minister of Transport, Steffen Bilger, asked Deutsche Bahn about the reasons:

Deutsche Bahn still tests the structure of the ground, which apparently is more complex than expected. The work at the tunnel cannot be resumed before this research has been finalized, for which at the moment there is no date. So far, the tunnel was expected to open in late 2025, which now appears unlikely.

We have decided to continue our successful series of the “Rhine-Alpine Talks” also in 2021. That is why we are delighted to invite you to our first “Talks” in the new year which will take place on 5 February 2021, from 11:00 – 12:30 h. We have chosen a current topic in order to inform you about the chances of financing your projects related to corridor development: “New EU Funding Programmes: New Opportunities for Corridor Development”. Become part of the corridor community and register here for this meeting!