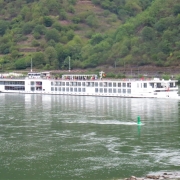 River cruising on the Rhine

In the calm days “between the years”, this newsletter also goes for a relaxing subject: River cruising on the Rhine and its tributaries.

However, in parallel, operators have also offered trips on cabin cruise ships for decades. Now, these trips have become a mass phenomenon. Of the more than 300 larger river cruise ships in Europe, roughly half operate on the Rhine and its tributaries. 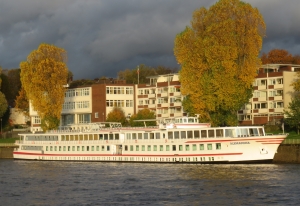 Photo (Martin Brandt): Classic cruise ship from the days before the boom

Compared to sea going cruise ships, the boats on the Rhine are rather small, typically carrying around 150 and sometimes up to 200 passengers, and staffed with about 40 people. Locks on the upper Rhine as well as on the rivers of Main and Mosel limit the size of the ships to a maximum length of 135 meters, as they do with freighters.

The classic route is between Rotterdam and Basel, with stops at the main touristic highlights, like Cologne, Loreley rock, and Strasbourg. Others go for the tributary rivers, often combining them with the central Rhine valley. As a result, the famous valley sees a good 20 cruise ships on any day throughout the season. While the main season is from spring to autumn, Christmas and New Year cruises are also rather popular. Therefore, many passengers will celebrate New Year at the famous tourist spots along the river. 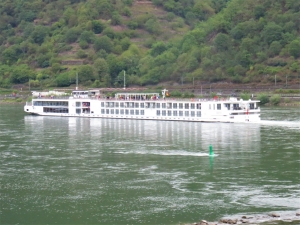 Given the number of available beds, the total size of the rapidly expanding industry can be estimated to reach roughly a million passengers per year, and a yearly turnover of more than a billion Euros. Passengers spend additional money on shore and for travelling to and from the boats. Staffing, catering and ship maintenance have become important economic factors along the Rhine. However, this is not in the focus of transport related politics and thus often is overlooked, despite its growth and economic importance. Fortunately, the river itself is no bottleneck.

The relatively small size of the ships allows adjusting individual ships to separate markets. Leading operators run fleets of more than a dozen ships. Brands differ in markets and levels of comfort, perhaps more so than in itineraries. Many of the passengers are overseas tourists, usually of mature age, a rapidly growing segment in international tourism. 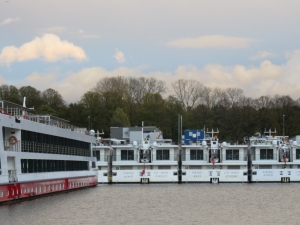 While guides evaluating sea-going cruises have been published for many years, the evolving mass market also made guides for inland cruises appear; they can easily be found on the net and are specialized in information on the touristic side of the business.