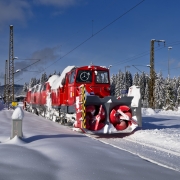 With 400 trucks and 24 freight trains per day, the Intermodal Center of Novara (Cim) is at the heart of the European connections: 190,000 semi-trailers leave Cim every year, carrying goods to Rotterdam and Hamburg, to Paris and to the great ports of the Mediterranean and Asia. Novara is located in Piedmont region, west of Milan.

Intermodal operator Hupac recently entered Cim as the major shareholder, finalizing the corporate privatization process. For Cim is time to look at the future opportunities: the priority is to strengthen intermodality, investing in more efficient and modern infrastructures. 6 million euros will be allocated to triple the entrance tracks, making the entry and exit of trains easier and faster.

Unusually heavy snowfall, together with storms and resulting snowdrift, have affected life in the Netherlands and northern Germany. North of Cologne, rail traffic temporarily came to a halt during the past days. It is still severely affected. Many local connections and most long distance passenger rail services are not operating.

In the Netherlands, the port of Rotterdam communicates that goods traffic by road and rail was heavily disrupted on Sunday and Monday. But from Tuesday it is basically back to normal, and so is terminal operation. However, passenger transport remains limited. Here is a blog with some great winter photos, by Dutch infrastructure operator prorail (external link).

The current winter flood on the Rhine has passed its peak, and shipping will soon be resumed on its whole length.

The EGTC Rhine-Alpine held its first 2021 “Rhine-Alpine Talks” on 5 February, with a record one hundred participants. The topic was “New EU Funding Programmes – Opportunities for Corridor Development“.

Paweł Wojciechowski, EU Coordinator for the Rhine-Alpine Corridor, spoke on the role and importance of EU funding for corridor development, before the current planning of the funding programmes Horizon Europe, Interreg North-West Europe and CEF Transport were presented to the participants.

The next Rhine-Alpine Talks will be held on 5 March, dealing with long-distance passenger services along the Rhine-Alpine Corridor.