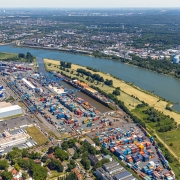 Ports of Antwerp and Zeebrugge to Join Forces

Antwerp/Bruges, 12 February 2021: The City of Antwerp and the City of Bruges have reached an agreement to merge their respective ports. The two-city agreement marks the start of a unification process that is expected to take a year to finalise. Once completed, the ports will operate under the name ‘Port of Antwerp-Bruges’. As a result of the merger, the ports will be able to strengthen their position within the global supply chain and continue their course towards sustainable growth. Furthermore, the unified port will be more resilient to the challenges of the future and will take a lead in the transition towards a low-carbon economy.

The shared position of the ports of Antwerp and Zeebrugge within the global supply chain will receive a significant boost. The merged port will become the most important container port (157 million tonnes/year), one of the largest break bulk ports and the largest port for the transhipment of vehicles in Europe. Furthermore, the port will account for more than 15% of Europe’s liquid natural gas transited and it will of course remain Europe’s most important chemical hub. Finally, it will be the largest port for cruise ships in the Benelux. With a total transit capacity of 278 million tonnes per year, the unified port will be able to consolidate its leading position in the world.

Read the joint statement of both ports here (external link).

The RailFreight channel’s weekly newsreel featured two “hot” topics of the Rhine-Alpine corridor last Friday: First, the winter weather in the north of the corridor, with interviews made on the spot about the rather difficult traffic situation. Second, the importance of last December’s opening of the Ceneri tunnel on the Gotthard line, connecting Italy to the north, in the view of Swiss intermodal operator Hupac. Here is the (external) link.

Duisport Closes the Year 2020 on a Successful Note

Despite the coronavirus pandemic, container handling at duisport in 2020 grew by 5 percent to 4.2 million TEU (previous year: 4.0 million), which is a new record. With a share of around 55 percent, container handling is the most important duisport goods segment. Overall, the duisport Group handled almost 59 million tonnes in the year 2020, based on an initial analysis. That is 3 percent less than in the previous year. (2019: 61.1 million tonnes). The drop is due to the political move away from coal handling.

Particularly rail-based freight traffic with China grew by approximately 70 percent during the past financial year. In 2019, an average of 35 to 40 trains traveled between Duisburg and various destinations in China. As of the second quarter of 2020, the Port of Duisburg registered an increase to up to 60 trains a week. Developments in eastern Europe are also very positive. Expanded connections to Poland in the trailer business have made a significant contribution to continued growth for a number of years already.