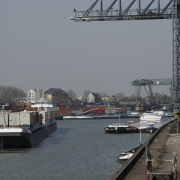 This Monday, a considerable landslide has blocked the railway line along the right bank of the Rhine, at Kestert in the Middle Rhine Valley near the famous Loreley rock. It cut through Europe’s most heavily used freight traffic line, which is a central part of the Rhine-Alpine transport corridor. The line also has regular passenger traffic, but that is only regional.

So far, only a small portion of the rocks actually blocks the railway line. However, the large slope above appears very unstable. Find pictures here (external link, German language, with a link to a video of the moving avalanche). It will take time to secure the railway line. Journalists give estimates of “days, or possibly weeks.”

Freight trains can in principle be re-routed via the other main railway line, along the left bank of the Rhine. However, that line has a substantial amount of passenger traffic, both regional and long distance. Adding the freight traffic will likely create a bottleneck.

It also blocked the federal road (“Bundesstraße”) along the bank of the Rhine. This has little impact on long distance road transport, which along the Rhine-Alpine corridor takes the Autobahn routes outside the Rhine valley. No people got harmed during the landslide.

The German Federal Office for Goods Transport (“Bundesamt für Güterverkehr”) has issued a report about the situation of infrastructure in German inland ports. In most ports, some or other infrastructure operates at capacity. One third of the ports has expansion plans. Half the ports report difficulties in compliance with environmental standards.

A main point is the yet insufficient number of berths with access to electricity. So far, barges usually run a diesel generator in port, which causes noise and air pollution.

The study lists the findings separately for smaller and larger ports, as well as for ports in the Rhine area and elsewhere. It can be downloaded here (external link, German language).

The Interregional Alliance for the Rhine-Alpine Corridor EGTC is looking for a part-time project officer for its specific activities. The EGTC participates with 32 partner organisations in the project PLANET – Progress towards Federated Logistics Through The Integration Of TEN-T into A Global Trade Network.

The PLANET project is funded by the EU under the Horizon 2020 programme. It runs until May 2023. The officer will be in charge of the implementation of the EGTC tasks defined in the project’s work plan in close cooperation with the Director and the EGTC office. Find the details here and please feel free to forward this link to any interested person.