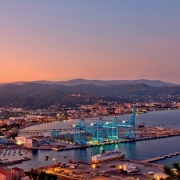 Ludwigshafen / Mannheim: Elevated highways in Ludwigshafen feed the two road bridges across the Rhine between Mannheim and Ludwigshafen.  One of them, opened in 1959, was considered unsafe for traffic last August and has further deteriorated since. A segment of roughly half a kilometre may now be unable to carry its own weight. This led to closure of all urban traffic underneath, including streetcar lines. What already was a difficult situation for regional traffic, causing digestion even across the Rhine in Mannheim, now is extremely problematic also for urban connections in Ludwigshafen.

Demolition of the old structure will start at the end of the month. The planning process for a replacement has started, but construction will take many years. Meanwhile, the town’s largest employer, BASF, warns that traffic condition in city and region will seriously affect business. 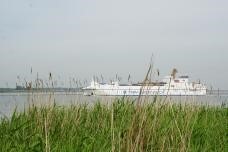 Antwerp / Zeebrugge: Hydrogen has an important role in significantly reducing CO2 emissions. That’s why Deme, Engie, Exmar, Fluxys, Port of Antwerp, Port of Zeebrugge and WaterstofNet have teamed up. A joint study will form the basis for a number of concrete projects to produce, transport and store hydrogen.

In the first phase the partners will carry out a joint analysis of the end-to-end chain of importation and transport of hydrogen. The objective is to map out the financial, technical and regulatory aspects of the various links in the supply chain. This includes production, loading/unloading and transport by sea and by pipeline. The results of the analysis will provide a roadmap showing the best way to carry hydrogen for the various applications in the energy and chemical sectors. The analysis is expected to take around one year to complete. 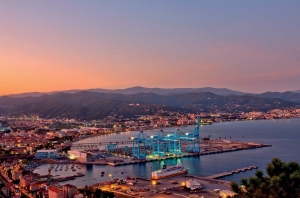 Vado Ligure: The new Vado Gateway container terminal in Vado Ligure was opened in December 2019. It is the result of a 450-million-euro investment. APM Terminals, with a share of 50.1%, has invested 180 million in the project, a further 43 million has been provided by project financing. Chinese Partners Cosco Shipping Ports have a 40% share and Qingdao Port International a 9.9% share. The terminal was commissioned by Autorità di Sistema Portuale del Mar Ligure Occidentale (Western Ligurian Sea System Port Authority). It will now entrust APM Terminals with the management of the facility for the next 50 years.

The Vado Gateway terminal is a hub for cargo moving to markets north of Italy, such as Switzerland, Germany or north-east France. The new terminal has already secured two important services operated by A.P. Moller-Maersk. Once fully operating, Vado Gateway capacity will amount to circa 900,000 TEUs per year. APM Terminals’ target is to move 40% of containers to and from Vado Gateway by rail.