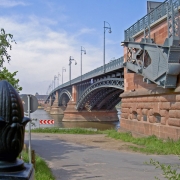 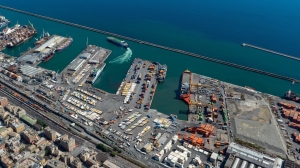 Genoa: In December 2019 the contract for the road works was awarded, as contained in the Extraordinary Program of urgent interventions for the recovery and development of the Port of Genoa. Its total cost is 128 million Euros.

The assignment went to RTI Pizzarotti & CSpA, which will design and carry out the road constructions: Several road segments, a car park, a bridge, as well as securing the Pionieri d’Italia viaduct and the static consolidation of Ponte dei Mille.

Another main bridge across the Rhine temporarily closed 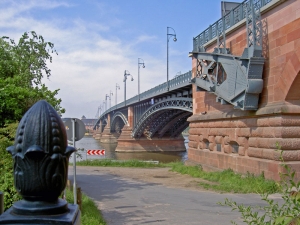 Mainz/Wiesbaden: The “Heuss-Brücke”, linking the twin cities of Mainz and Wiesbaden across the Rhine, will be closed for maintenance until mid-February. The bridge, built in late 19th century, rebuilt after the last war, and thoroughly modernized in the early nineties, needs more repair.

The Heuss-Brücke has been closed for heavy trucks already in the nineties. However, it is the only connection between Mainz and Wiesbaden besides two Autobahn bridges. Its closure has no direct impact to long distance traffic, except by re-routed traffic that may add to congestion on the Autobahn routes. The main effect is on the local traffic between both cities. However, there will be a single lane open for taxies and buses, and the bridge will remain fully open for pedestrians and cyclists. 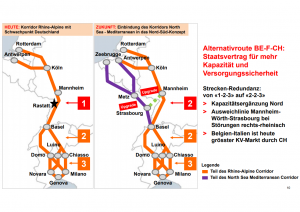 Switzerland: Swiss operator of combined transport HUPAC and other main actors in the Swiss transport sector have assessed the developments around the Rhine-Alpine corridor. They demand an international contract (“Staatsvertrag”) for increased capacity, including utilization of additional parallel routes:

“It is evident that there is an urgent need to create an alternative for the bottleneck in the north. Only the left bank of the Rhine via France can be considered as an efficient alternative route (flat track). It is ideal for the high-volume Belgium – Italy route. There is also a direct link with the corridor on the right bank of the Rhine, which serves to reduce risk. However, these routes do not yet correspond to the corridor parameters of the Swiss transit axis and therefore currently only carry a small volume of traffic.

In order to make better use of the capacities on these alternative routes for combined transport through Switzerland, the Zeebrugge/Antwerp – Strasbourg – Basel route and the Wörth – Lauterbourg – Strasbourg link must be upgraded to the parameters of 740m train length, 4m corner height, 2000 t with one locomotive, ETCS. This would also create a system in the north with two access routes and an alternative on the left bank of the Rhine.”