Near Savona, at the Ligurian coast in Italy, a motorway bridge collapsed on 24 November during a mud avalanche after heavy rainfall. No casualties are reported. The collapsed bridge was opened in 1976 and held the northbound lanes of motorway A6, connecting Savona with the Turin area across the coastal mountains. The motorway had originally been opened in 1960 as a three-lane highway. It was later converted into a four-lane highway by adding a separate northbound driveway. The older road now holds the southbound lanes. Its apparently undamaged bridge was closed for inspection, being in close vicinity of the accident site.

This will be of relevance for hinterland traffic to and from Savona, where the new Vado Ligure maritime container terminal is to open in December. Resulting detours may further complicate the situation in Genova. Worldwide, according to Wikipedia (external link) this is already the 10th collapse of a significant bridge since the Morandi bridge accident in Genova on 14 August 2018. 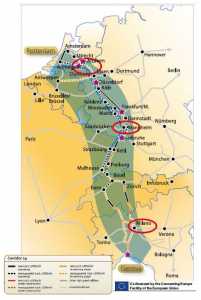 Results of RAISE-IT were presented at the Advisory Board meeting in Cologne on 8 November. The project deals with optimization of passenger transport along the Rhine-Alpine corridor. Topics are: Integrated cross-border timetable and services, stations as liveable and convenient gateways, and optimised transfer to and from regional trains.

The assessment revealed an additional potential demand for international long-distance services; an overall +60% with time-horizon 2035. Effective rail connections for all can be supplied by more frequent services, by improved railway capacity, or by other transport modes. However, improving regional accessibility and service integration also for non-frequent travellers from abroad should become an urgent issue, especially for nodes located on an international Corridor.

Locally, often the placement of signage is not consistent or visible, which confuses people when looking for their way. Secondly, ‘walkability’ analysis revealed a number of obstacles to pedestrian access (e.g. difficult crossing, long traffic lights phases, unpleasant subways, conflict between pedestrian routes and bike parking, etc.), especially in the areas close to the studied stations. 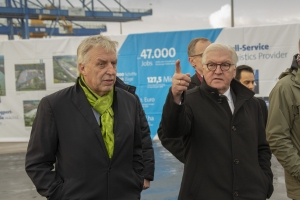 On 22 November, Germany’s President Frank-Walter Steinmeier visited the Port of Duisburg as part of his visit to the Ruhr region. He toured logport I with duisport Chief Executive Officer Erich Staake. The former site of the Krupp steel mill in Rheinhausen has given way to a booming 265-hectare logistics area that is now home to approximately 50 companies and more than 5,000 employees. Directly or indirectly, the Port of Duisburg employs over 47,000 people and is therefore the job engine in the Rhine-Ruhr region.

The second destination of President Steinmeier’s visit was duisport subsidiary startport. Started two years ago, the startup accelerator has grown into a platform for globally inspiring and innovative ideas for the logistics industry.

The day before the visit, the Swiss daily “Neue Zürcher Zeitung” featured the development of duisport and its contribution to regional economic development as well as its role in the “New Silk Road”. The elaborate article puts the facts into context for an interested general audience.

The article can be found here (external link, German language).