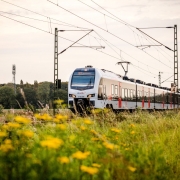 During the Third Rhine-Alpine Talks last Friday, held by the EGTC Rhine-Alpine, more than 50 viewers debated “Cross-Border Cooperation on Transport”. Click below on the titles of the presentations to view or download them.

Hans-Peter Vetsch, General Secretary of the Gotthard Committee, presented “Cross-border continuation of the Gotthard and Ceneri Basetunnel”. With the opening of the Ceneri base tunnel, the total rail capacity across the Swiss Alps will be 370 freight trains per day. Unfortunately, on the German side, the combined capacity of routes for years to come will remain in the magnitude of 260 trains per day, and the Milan area has bottlenecks, too. Additional capacity is therefore sought on bypass routes.

Peter M.J. Pol, Strategic Planner, City of The Hague, and Secretary of the Metrex SURE Eurodelta Network, presented “Eurodelta: A Functional Urban Area (Megaregion) on a Transnational Scale.” He showed an urbanized region of almost 50 million inhabitants, spreading from northern Belgium and southern Netherlands to the Ruhr area in Germany.

Martin Guillermo-Ramírez, Secretary General of the Association of European Border Regions, concluded the session with an appeal to national institutions to realize the need for international infrastructure.

PS: The next Rhine-Alpine Talks on Friday 6 November will be about “Smart Mobility for Passenger Transport.”

The Dutch province of Gelderland plans a new intermodal rail terminal. It is intended to link the regional economy to the rail network of the Rhine-Alpine corridor and beyond. Plans have now been published. Find general info about the terminal here.

A full-length container train to China has left the port of Rotterdam some days ago, with baby milk powder for China. The milk powder reached Rotterdam from Ireland by short sea shipping. The forwarder had suggested the rail link of the “new silk road” to the western Chinese city of Xi An to shorten travel times. The first part of the journey is along the Rhine-Alpine corridor. Further unit trains of Irish milk powder are planned for the coming months. Here is the whole news.

This website uses cookies to improve your experience while you navigate through the website. Out of these, the cookies that are categorized as necessary are stored on your browser as they are essential for the working of basic functionalities of the website. We also use third-party cookies that help us analyze and understand how you use this website. These cookies will be stored in your browser only with your consent. You also have the option to opt-out of these cookies. But opting out of some of these cookies may affect your browsing experience.
Noodzakelijk Altijd ingeschakeld