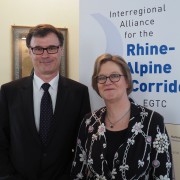 The Interregional Alliance for the Rhine-Alpine Corridor EGTC met on 11 April 2016 inNovara/Italy for its 3rd Assembly meeting. One prominent guest speaker was the EU-Corridor Coordinator for the Rhine-Alpine Corridor, Paweł Wojciechowski who underlined the importance of the new Interregional Alliance. Together with the Chair of the Interregional Alliance for the Rhine-Alpine Corridor EGTC, Conny Bieze, it was agreed to coordinate their work for the development of this most important European transport axis, by joining forces and bringing in their mutual interest both, from the European and regional perspective. Both, the further development of EU corridor work plan until 2018 and of the joint corridor strategy of the EGTC benefit from such cooperation.

Professor Scholl from the ETH Zurich and Professor Drewello from the University of Applied Sciences Kehl provided significant input to the further development of a sustainable corridor development strategy. This major European corridor should demonstrate as a best practice the will to cooperate and to compete with other transport corridors in the world.

Since its founding in April 2015, the EGTC has prepared or supported several project initiatives that contribute to its joint strategy – for example the CEF projects ERFLS and RAISE-IT or the initiatives on IT based capacity management and LNG for heavy duty transport.

The EGTC Assembly meeting in Italy came just in time after the decision of the North-Italian Regions Liguria, Piedmont and Lombardy to jointly develop the transport infrastructure and the revitalization of the North-West Italian logistics.

The meeting in Novara can be seen as a starting point of a close working relationship between the European Commission and the regions gathered in the EGTC!

The Assembly also agreed the accession of four new members from Italy, The Netherlands and France.