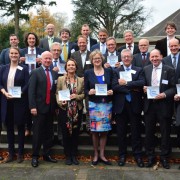 Conny Bieze, Chair of the Interregional Alliance for the Rhine-Alpine Corridor EGTC and Vice Governor of the Province of Gelderland, invited the EGTC members and representatives of the European Commission to the second Assembly meeting on 9 November 2015 in Berg en Dal near Nijmegen in the Netherlands. It was the first regular Assembly Meeting six months after the founding of the EGTC.
Herald Ruijters, responsible for the Trans-European Network within the Directorate General Mobility and Transport of the European Commission, expressed his full support of the work of the EGTC. He invites the EGTC to take an active role in the planned update of the Work Plan for the Rhine-Alpine Corridor. He also offered that the EGTC as an important stakeholder of the Rhine-Alpine Corridor should play an active role during the TEN-T days 2016 in Rotterdam. As for funding opportunities, he referred to the recently published 2015 Call for Proposals under the Connecting Europe Facility. There, especially the priorities “Urban nodes” and “Multimodal logistics platforms” offer opportunities for interregional cooperation projects.
Łukasz Wojtas, Policy Advisor of the Corridor Coordinator Paweł Wojciechowski, pointed out that he sees the EGTC as the most important stakeholder in communicating on transport issues to local citizens on the one hand and to the European Commission on the other.
Conny Bieze underlined the role of the EGTC as “Corridor Ambassador”, bringing together the regional view from the perspective of the citizens and the European TEN-T policy.
The Assembly welcomed three new members – Port of Antwerp, City of Mainz and Canton Basel-Stadt to the EGTC. Thus, the EGTC now consists of 16 members from 5 countries – the Netherlands, Belgium, Germany, Switzerland and Italy. Further potential members from all countries from along the corridor are in negotiations to join the EGTC. Thus, the EGTC gives more and more regions a strong voice on the European floor.
The internationally composed board of the EGTC is now complete with the newly elected Vice Chair, Paolo Balistreri, General Secretary of Confindustria Piemonte in Italy. The Managing Committee, consisting of Conny Bieze as Chair, Birgit Simon as one of the two Vice Chairs and Jörg Saalbach as Director of the EGTC, is now complete.
The Assembly discussed the work plan of the EGTC and first concrete project ideas for the coming years. The members discussed to cooperate for instance in projects on LNG deployment for trucks, integrated time tabling for passenger transport, on borderless autonomous driving and a “corridor capacity platform” for multimodal freight matching.
Finally, Conny Bieze and the participants visited project sites in the Province of Gelderland. Exemplary for integrated sustainable planning is the project for flood protection at the river Waal in Nijmegen / Veur Lent. The Assembly also visited the river control centre of Rijkswaterstaat.