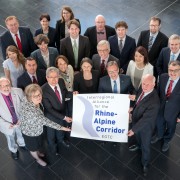 On 24 April 2015, the “Interregional Alliance for the Rhine-Alpine-Corridor EGTC” has been founded in Mannheim. Thirteen founding members from Italy, the Netherlands and Germany have signed the Convention.

The development strategy for the Corridor which has been jointly elaborated during the project CODE24, the findings gained as well as  the corresponding measures and actions shall now been implemented with joined forces by the EGTC.

In this context, it is essential to focus on the better and more efficient use of the existing infrastructure and the upgrading or construction of transport capacities for goods and passengers. At the same time adequate measures for the improvement of living conditions – especially noise protection – are on the agenda.

By the establishment of the EGTC, the close coordination of its members shall be guaranteed for the future. It is crucial to facilitate the consideration of local and regional interests when developing this most important European Corridor.

Among the first concrete activities of the EGTC it is planned to apply at least for one new EU-funded project; first ideas for projects will seamlessly tie in with the results gained with CODE24.